Carrying Your Own Bag IS Better

I admit to being a die-hard fan of Buffy the Vampire Slayer. Joss Whedon’s writing in that tv series was superb and memorable. Which is why when I thought of this post, the quote “Fire bad, tree pretty” came to mind. At the time Buffy and her friends had just defeated the evil principal of their high school in an epic battle after he had transformed into a gigantic snake bent on turning the world into his personal hell. Looking out over the high school as it was engulfed in flames and the snake lay dead on the lawn, Buffy was asked how she was doing. Exhausted, she replied, “fire bad, tree pretty”.

I may not have defeated a massive snake but sometimes the battle to protect the environment can be exhausting.

There are so many elements to the problems with the environment that it can be overwhelming. Sometimes it helps to start with something simple.

I have been carrying my own shopping bags for over 15 years. It started when my husband and I lived in an apartment. Each time we got a plastic bag from shopping I would put it in a bigger bag until we could find a use for it. Eventually, I had two big garbage bags full of smaller plastic bags. We just weren’t using them fast enough. I had no place to put all these bags. I heard you could take them to thrift stores and they would reuse them for their products but it wasn’t really sanctioned or promoted. Recycling of bags at the time was unheard of. I hated the idea of throwing them out.

So, to stop the tide, I started carrying my own bags. At least I wouldn’t be acquiring any more plastic bags. I was a bit of a pioneer in this. No one else I knew was doing it. I started giving away nylon shopping bags as gifts hoping others would stop acquiring bags that were destined for the landfill.

You would have to live in a cave these days to not know that the world is inundated with plastic. There is so much plastic waste that we have islands of it floating in the oceans. Drive down any highway, any stretch of road and you will see garbage caught in the trees and bushes. It’s disgusting, right? Obviously, we need to stop acquiring plastic bags that end up floating off in the wind and polluting the world around us.

Recently, I found a great post from Bright Vibes that supports this belief. The article describes 8 ways you can quit plastic today. Carrying a reusable bag is one of the steps. But then my research journey took me to a Canadian site called All About Bags and I had to stop and reassess. Not because I was wrong all these years but that I was missing some keys facts.

All About Bags is a site put out by the Canadian Plastics industry Association as a “resource tool for the debate about bags”. Through various posts, they set about debunking a lot of the myths surrounding plastic bags. For example, plastic bags makeup only 0.8% of the litter stream – at least in Toronto, and less that 1% of the waste stream – what ends up in landfills.

Some other interesting tidbits:

The essential argument of the site is that plastic bags are in fact better than carry your own bags because they are not only reusable for a multitude of things including garbage and compost waste but that they can now be recycled. Carry Your Own bags are often made from non-recyclable materials to make them strong enough for more items and to last longer.

However, there are MANY types of reusable bags. We had some cotton bags that lasted years. We also purchased some grocery bins from a local chain that not only carry more groceries at a time, but they are great for keeping your lemons from rolling around in the back of the car. When I go to the local market for vegetables, I take a handmade willow basket that a friend made.

While I concede that plastic bags are good because they can be reused for wet and dirty objects,  I am reluctant still to say they are “better” than carrying your own reusable bags.

So to recap, plastic bags NOT TOTALLY HORRIBLE in areas where they are put to good re-use and recycled appropriately but carry your own bags are BETTER when they are made from durable and or organic materials.

I would love to see more stores selling reusable bags made out of hemp, the miracle fibre that is even better for the environment than organic cotton. In addition, let’s figure out how to make a plastic bag substitute that is totally biodegradable. 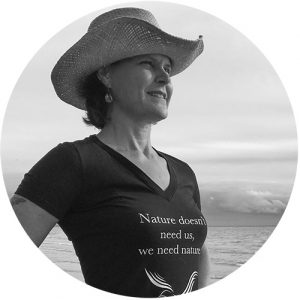 My name is Leni Johnston and I am a photographer and a writer. This Journal is to showcase samples of my writing. You can read more of my work in the Photo Learning section and on my sustainable living blog, The Red Door Garden.

Feel free to contact me for freelance writing work.

Click on the Portfolios to see a selection of my commercial photography and Galleries to see my personal fine art images.

“It’s not what you look at that matters but what you see”. – Henry David Thoreau